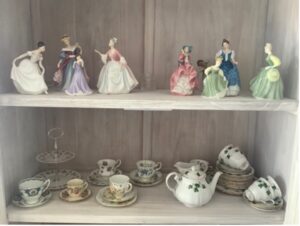 The other day I decided to rearrange a couple of items of furniture in my living room (as I so often do.). This involved removing all the items in my precious China cabinet to lighten the load, enabling me to shift it along the wall by about a metre. This process escalated into a much more detailed task of cleaning, polishing, and then rearranging each treasured item.

As I admired the final product, I started to reflect on the whole idea of a China cabinet. Where did they originate? Who were the makers of China cabinets? My great grandfather was a carpenter by trade. Would he have made a China cabinet? When did the China cabinet become popular? What will become of my precious items after I have ‘gone to God’? 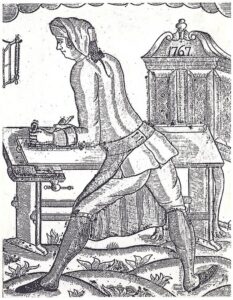 With all these ideas churning around in my head I started my research. The beginnings of working with wood started with cavemen and carpentry is one of the oldest trades. In the early days, basic cabinets were made by carpenters as rough items of furniture, designed for storage.[i] It was possibly around the mid 17th century that the term, ‘cabinet-maker’, first appeared. It is claimed by Whittaker in 1891, that ‘cabinet-makers’ were woodworkers with skills in veneering, marquetry and intarsia, practices introduced into Britain in the 17th century by the émigré Huguenots.[ii]

China cabinets were popular in the Netherlands and during the reign of William of Orange (located in the Netherlands) and Mary, China cabinets became sought after by the British aristocracy. By this time, with established trade routes to India and East Asia, China and Japan, the wealthy were able to purchase beautiful porcelain from the East. Refined cabinet making flourished as ‘China’ cabinets became a much-desired item for the display of their coveted items. The term ‘China’ became synonymous with beautiful porcelain.[iii] 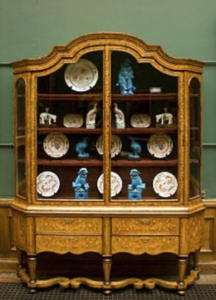 With the manufacture of European porcelain, China cabinets became even more sought after. During the industrial revolution, tools and machinery were invented to enable the mass production of furniture, including China cabinets. These examples were simple in design and made of walnut. Irrespective of design, they were mostly set against a wall where they could be readily viewed by visitors.[iv]

The Welsh dresser was a utilitarian item of furniture and was usually housed in the kitchen. Made of wood, it consisted of drawers and cupboards on the lower section and shelving at the top where crockery, silverware and pewterware were displayed.[v]

The Irish dresser, being evidence of an individual’s wealth and status, was reputed to be the most important item of domestic furniture in Ireland. Being a valued possession, the dresser was often given as a gift from the groom to his bride. Before the advent of pine dressers, traditional Irish homes would have featured stone shelves that were built into the walls. Sometimes they were made of slate.[vi] 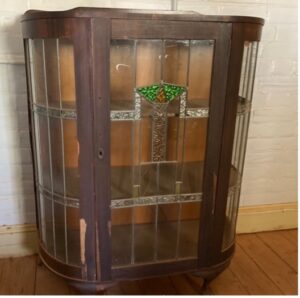 A china cabinet similar to my grandmothers. Photo by author

I will never forget my grandmother’s China cabinet. It was a very cluttered China cabinet, where stalagmite type towers of porcelain, fine bone China and glassware were displayed. The contents were rarely disturbed and remained locked behind heavy glass-patterned doors and walls, gathering dust, and looking somewhat neglected.  I can recall peering inside this fascinating item of furniture and wondering what the imprisoned items were exactly. Sadly, they remained there until after my grandmother passed away when they were released and distributed to the members of her family. I still have a few of those items. 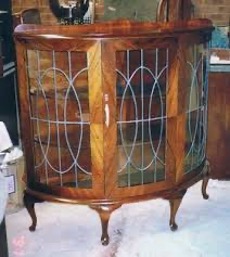 The youth of today are aware of our environmental issues and that our trash and landfill have become monumental problems. An heirloom register may help your descendants to decide to keep your family items and not despatch them to landfill. An heirloom register may do something positive for our planet, as well it will perpetuate your family stories.

As for my future, an ongoing research challenge I face concerns my maiden name, Figgis, an unusual surname. Where did it originate? Currently there are two theories. One being that it originated with the Vikings as ‘Vig’ and the other claims that Figgis is an anglicised version of a Huguenot surname. With this current research, I have discovered another support for the latter theory as my Figgis ancestors were essentially carpenters. This needs further research.

Editors comment:
Bev wrote an interesting blog about setting up a Heirlooms register, this story is a great follow-up to that.