↓
GSQ Blog→Uncategorised→Think outside the box! 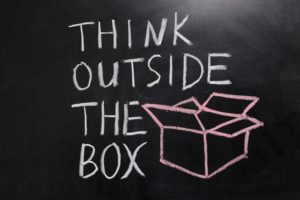 This is my first blog for GSQ. So I thought I would get my frustrations out in the first blog. I have been researching my family history for over 30 years. It was time consuming at first, sitting for hours in front of microfiche readers, but I knew the information was as near to being correct as was possible, allowing only for human error. However, today with the internet, each day I find mistakes in my ancestors’ information which need not be there. So I am sharing the good and the bad of using internet sites here!!

Recently, when looking up internet sites, I found examples which needed thinking outside the box, and these examples reminded me also, of the importance of checking all resources.

“Could that be right?”

For example, I was delighted recently to be able to solve something that puzzled me. A relative had told me a cousin Ethel Jarman had been ill in the later part of her life, and was not able to look after her children. I thought, “Could that be right?” As a mother, we look after our children, through thick or thin! Later, I found a letter her twelve year old daughter had written to the local paper, which I found on Trove. (I remember when I was little I used to write to the “Argonauts”…) no TV in those days. In her letter, Beryl mentioned her mother was ill with dengue fever. Having just helped my daughter during four months of Ross River Fever, I know how debilitating viruses can be. I then purchased her death certificate and found she had died from chronic myocarditis, which is brought on as a result of having dengue fever. So I was able to determine from information from Trove and a death certificate, the reason for Ethel being unable to care for her children.

On the other hand, on Ancestry, I found this unbelievable information…. My great great uncle Gilbert William Perrett had 24 children in 27 years. Surely the contributor should have thought, “Could that be right?” and no it isn’t. If that person had checked Gilbert’s death certificate and the birth certificates of his children, he/she would have found out that Gilbert had 14 children over 27 years……a big difference especially for his wife Anna!

Years earlier, I needed to “think outside the box” when I was researching my maternal grandparents. I purchased my great grandfather Gerhard Stolzenberg’s death certificate and was disappointed with the names of his birthplace and place of marriage. It said he was born at Bullo, and married at Wattleshire, Germany. Those places could not be found on an atlas. I then started thinking, surely there wouldn’t be a Wattleshire in Germany, sounded too English. I had also found an obituary which had the same spelling. No luck there! (Perhaps the person who did the obituary was the person responsible for the information on the death certificate!!!). While discussing this at school one day, a fellow colleague suggested I get the birth certificate of the first born in Australia. Wow! What a great idea, “that’s certainly thinking outside the box”. So on purchasing Heinrich Stolzenberg’s birth certificate, I found his father was born at Burgloh, (actual spelling is Borgloh). Having now found the birthplace I then found Wattenscheid the marriage place, which is nearby. I guess the pronunciation of Wattenscheid does sound a lot like Wattleshire!!

And so to my grandparents, Heinrich Stolzenberg and his wife Alvine Ruthenberg…..On another website I found that my grandfather had a brother, Henry /Harry Stolzenberg born on the same date. Once again, the contributor has not thought “Could that be right?”about the details, as this is the same person. Grandfather had these two other names as results of being German and had to change them during the war to a more English version of his name…..Then to Grandma, Alvine Ruthenberg. She was said to have a sister Alwine Ruthenberg…now surely the contributor should have thought,  “Is there a typing error here?” Well there was, as there was only one Alvine/Alwine Stolzenberg and her name was Alvine!

Need I go on to emphasise the importance of “thinking outside the box” and asking yourself, “Could that really be so?”