↓
GSQ Blog→Charles Dickens→Timelines – the interest and pleasure they can give
Just over a year ago, only a few months after I had joined the Genealogical Society of Queensland, I attended an Information Session on Timelines that was held at GSQ. At the time I was new to my family search and was deeply engrossed in obtaining birth, death and marriage certificates and was satisfied enough just to place each ancestor in the context of  where they had been born or died or who was married to whom and where they had been married. I had given little thought to what might have been happening in their town or local area or the world at large. Of course, I knew that one of my grandfathers had fought at Gallipoli and I knew that my own father had served in World War 2 but that was really as far as it went in setting my ancestors in the context of local or world events. The session I attended really captured my interest and made me realise that I could bring my ancestors to life by putting them into another context rather than just the one on the printed page of their relevant certificates. So, I began the habit of researching the events that had taken place in Australia and around the world on the particular date or in the year of any new certificate or family event that I uncovered. 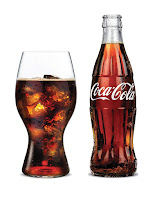 I found it all very interesting and discovered many unusual facts. For example, the Coca Cola syrup was invented by a pharmacist in America in 1886. This was the same year that two sets of my great grandparents were married, Charles Lewis and Katherine Osmond on 26th January in Alice River near Rockhampton in Queensland and Haughton Burgett and Elizabeth Connor in Glen Innes, NSW on 10th May. Mind you, the first bottles of Coca Cola were not produced in Australia until many years later, so a drink of coke would not have been a beverage of choice at each of their respective wedding celebrations.  A production team from the company was sent from America and the first bottles of Coca Cola rolled off the production line from a factory on the corner of Crescent and Dowling Streets in Waterloo, Sydney, in 1937.

On a much more serious note however, I discovered the terrible conditions occurring in Ireland during the few years before and after my great great grandfather’s birth. I knew about the Great Famine of 1846 to 1851 and recognise that it would have been a serious factor in some of my ancestors coming to Australia in the late 1850’s and early 1860’s. However, when searching for dates to enter on my timeline I discovered that there had been a massive volcanic eruption in the Dutch East Indies (Indonesia) on April 10, 1815  which resulted in “A Year Without Summer” in 1816 in parts of the northern hemisphere including Ireland. As a result of this event, crops failed in Ireland between 1816 and 1819 and then again in 1822 and between 1816 and 1819 a major typhus epidemic occurred in which an estimated 100,000 Irish people perished. Into this very difficult time was born my great great grandfather, Owen Connor, in 1818. He was to grow up to be convicted of stealing a cow in 1836 at the age of 18, sentenced for life and transported to New South Wales. Knowing the history of his country around the time of his birth I wonder what hardships he may have suffered as a child and how they may have contributed to his arrival in Australia.

Another find that captured my imagination was the realisation that one line of my family tree was living in London at the time of Charles Dickens, the literary giant. Charles Dickens was born in 1812 and died in 1870. He began his literary career as a freelance reporter for the law courts of London and then a few years later was employed as a reporter for two major London newspapers. His very popular publication The Pickwick Papers was published during the years 1836 to 1839. The many novels he wrote during his lifetime were first serialised in weekly and monthly magazines and later reprinted in book format. These novels were hugely successful and people would wait anxiously to buy the magazines to read the next instalment of each story; such famous novels as Oliver Twist in 1837, Nicholas Nickleby in 1838, A Christmas Carol in 1843, David Copperfield in 1850 and my favourite, Great Expectations in 1861.
Some members of the Burgett line of my family tree lived in London and married, had children and went to school during the time of Dickens. In 1821 my ancestors Charles Burgett and Ann Skinnerd were married. They had 8 children and one of them was Frederick Augustus born in 1827. He was married in 1856 to Mary Ann Scott and  their first son Haughton James Frederick (my great grandfather) was born in 1857. They had 5 other children. Haughton came to Australia in 1878.
It is very well recorded that the writings and novels of Charles Dickens were extremely popular and well loved in his lifetime, not only in England but around the world. I wonder if some of my ancestors were also fans of his writing and waited excitedly for each instalment of his serials. Or maybe in his earlier years when he was a court and political reporter for major newspapers they read his articles and opinions over their breakfast, or morning cup of tea. Did they discuss his articles around their dining room table or did they speculate on what they thought the next instalment of each of his famous novels might reveal? I find pleasure in daydreaming about the possibility of this happening, particularly when it is a novelist who has brought me such pleasure in my own lifetime.
This is only the tip of the iceberg of what I have found in my research into timelines. I would heartily recommend it to anyone who hasn’t tried it and has the time to do so. Time is the operative word, as you may find that you disappear down the proverbial timeline “rabbit hole” early one morning and not reappear until the sun has set and darkness has fallen. But I guess you are all familiar with that particular phenomenon. It happens regularly when you embark on family history research. 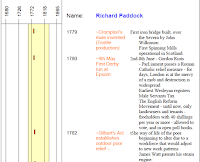 Meg Carney
As moderator of the GSQ Blog, one of my tasks is to invite a guest to provide a post in those months when there are five Mondays. For June, I invited a member of the GSQ Writing Group to be the guest blogger and Meg took up the challenge. This is Meg’s first ever blog post and I hope you enjoyed it. I decided to create a timeline in Legacy for my newly-found 4th g.grandfather Richard Paddock, b. 1764; part of this is attached and makes interesting reading and opens up many avenues for research.  Pauline