We were sitting in our newly renovated office pod, our surroundings bright and clean and the setting modern.  Explaining how interested I was becoming in researching my family history and supporting people who were discovering their own, my colleague looked at me with a benign smile.  “I can’t”, she said in a very determined way, referring to researching her own heritage.  “My father’s name was Smith!”  As any self respecting genealogist would, I responded quickly and decisively.  “It IS do-able.  You would have to be very thorough with your research but,” I said, with genuine enthusiasm, “it is do-able.”
As I unrolled… and unrolled… and unrolled the more than 4 metres of scroll that is family tree chart #21 across my lounge room floor, immediately obvious to me was the neatly printed handwriting and meticulous layout.  Each branch, each name had been clearly and in a considered manner plotted against the others and each generation was allocated a different colour.  Consequently, whoever has compiled this chart has done so in a way that makes it easy to follow the ebb and flow of names and families through time. 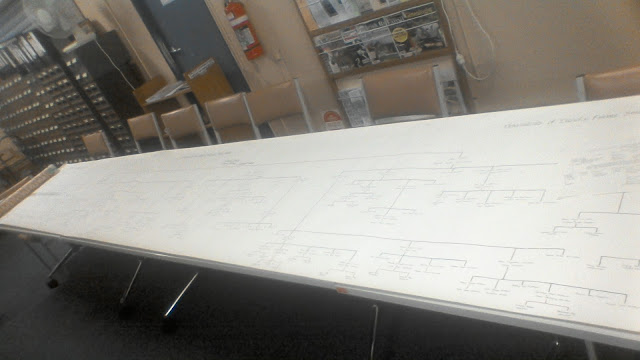 David Smith, progenitor of the family so beautifully displayed, was married for the second time to Margaret Ward.  It was from his first wife, Emma James, however, that all the family members listed descend.  Son William James (his second name an homage to his maternal line perhaps?) married Sarah Anne Imogen Collins; together they had eight children.  Thomas Daniel’s six children were by his first wife Frances Jane Marley.  Daughter Amy had five children by her husband David John Williams.

Because chart #21 is neatly presented, it is easy to follow all 265 of David and Emma’s descendants and to understand their links to each other, including the many in laws who have married into this particular line of the broader Smith family.  I suspect that the reason this tree was originally produced was for display purposes.  I can see it in my mind’s eye, proudly hanging on a wall in a small town or school hall, Smith descendants gathered around and peering closely, attempting to discover their part in such an extended lineage. 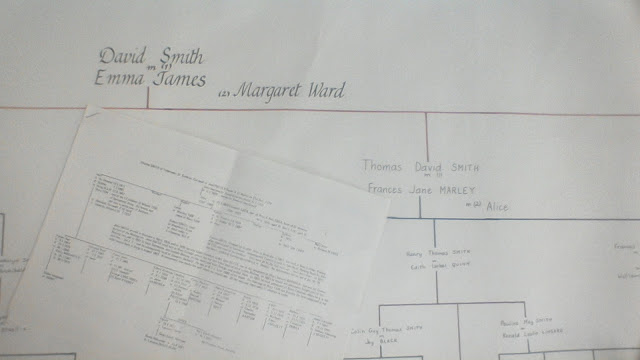 Family Tree Chart #13 displays the descendants of Thomas Smith and his wife Jane Potter, extending from the early 1700s to the early 1940s.  It is much smaller in size and more narrow in scope than #21.  Chart #13 could possibly have been photocopied from a book and while it also focuses on a particular branch of the larger Smith family it is delightfully different from chart #21.  Chart #21 gives no details other that first and surnames; no BDM dates, locations or immigration details.  I admit that what has surprised me as I have worked my way through GSQs holdings of family tree charts, are the details that can be included outside of what could be considered standard family tree information such as names and dates.  To date I have seen family tree charts that have contained details regarding immigration, occupations, short stories and photographs of the individuals involved, titles and heraldry.   Chart #13, I am thrilled to report, contains, apart from the standard family tree details, the most delightful information about Thomas and Jane and their offspring.

Thomas himself was Cornish and because the writer of this chart included locations for BDMs, it is possible to know that major life events for Jane and Thomas, their son John and his wife Elizabeth, her parents Peter and Ann Cock and some of John and Elizabeth’s children, all occurred in St Keverne.  Thanks to https://en.wikipedia.org/wiki/St_Kevernewe know that “St Keverne (Cornish: Lannaghevran) is a civil parish and village on the Lizard Peninsula in Cornwall, England, United Kingdom.”  It seems that the Smith and Cock families lived, married and died in this small corner of Britain.  That is, until, John, Thomas and Elizabeth’s grandson, immigrated to New South Wales sometime between his birth in 1811 and his marriage in 1841.

In a paragraph set right in the middle of the chart, the writer provides details about John and his wife Mary Tom.  “John SMITH arrived in Australia in April 1836 and in 1839 became Superintendent to Mrs John BETTS, one of the daughters of (Rev) Samuel MARSDEN.  She was the Crown grantee of the Molong run.  John SMITH lived first at Rose Cottage which was the first house built at what is now Molong.  In 1843 he leased and afterwards bought part of the Molong run, and in 1847 he built Gamboola, just outside Molong, on the main road from Orange, and settled there.  In 1851 he took possession of Booree Cabonne, where his g. g. son still lives… and he subsequently lived at Llanarth, Bathurst.  He was an M.L.C from 1880 till his death.  His marriage to Mary TOM was possibly the first celebrated at the little church built at Byng in 1842.  A monument now marks the spot where the church was.  Of the marriage there were 11 children….”  What a wonderful addition to a family tree chart;  how fabulous to discover these extra details providing context for an ancestor’s life.  Charmingly, I think, there are also notations with extra details concerning the lives of John’s wife Mary and brother Francis, giving a broad, colourful picture of this diverse and interesting family.

After the conclusion of last Saturday’s education session, I took the opportunity to again unroll chart #21, sending it spiralling across GSQs three long research tables.  Members were collecting their belongings and were enthralled by the size, amount of detail and the layout.  Robust conversation ensued, strong opinions flowing backwards and forwards as members discussed the level of detail they would prefer to see on a family tree chart if it was to be helpful for their research.
Interestingly, one of the members had made a comment during the session, to the effect that she had almost not pursued a particular aspect of her research because it involved her Smith line.  She was very excited to tell us that she went looking and found wonderful details about her Ag Lab ancestors, Smith’s though they were.  I would now, in hindsight, to this member and the colleague I mentioned earlier, quote directly from the second page of chart #13, “It’s harder but it’s even possible to work out a family tree with a surname like Smith.” 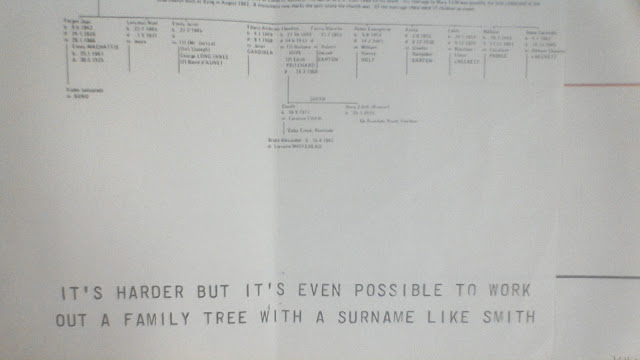