Have you ever had serendipitous moment while doing your family history? 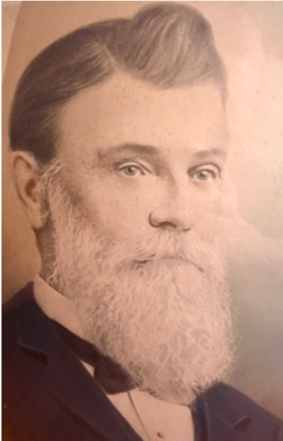 I had decided to write in this blog post about my maternal great grandfather, Harry Weedon Hardwicke, who I briefly mentioned in my previous blog post.   He was born in Tasmania, the thirteenth child of Elizabeth and Charles Browne Hardwicke. I haven’t been able to find his birth or baptism certificate but we know that he moved to Townsville, Queensland where he met his future wife Louise Christina Amy Schattling and they married  on 20 January 1876.[1]   Louise’s family had immigrated from Germany.

Harry managed Dotswood and Rockwood Stations, near Hughenden, around 1875 and was the first hotel keeper and storekeeper in Hughenden and the proprietor of the Queen’s Hotel, Townsville.[2]  The Hardwickes were living a comfortable life in Sydney when my grandmother was born in 1886 but moved back to Queensland some time after that.

We were told by our mother that Harry Hardwicke lost his money because he had invested heavily on a tourist venture on the Brisbane River and it was destroyed during the 1893 flood.  It transpired that he had gone into partnership with John Dunmore Campbell, Robert Philp, John Luckmann and Charles Anderson (who retired from the firm in 1890[3]) to set up a tourist venture, the Queensport Aquarium, on the Brisbane River. It was built at a locality known as Queensport (hence its name),  just east of the present Gateway Bridge, behind Gibson Island and at the end of Aquarium Avenue.

The Aquarium opened to great fanfare on 7 August 1889.[4]   It was set among 11 acres of landscaped grounds with a two storey aquarium building which imitated the aquariums of English seaside resorts. It contained a 1400 person concert hall  with an organ which entertained people at concerts on Saturday and Sunday afternoons. There was a  seal pond, shark enclosure and a miniature zoo with the largest collection of tigers in captivity in Australia.[5]  People could travel to the wharf at the Aquarium via three steamers (the Natone, Woolwich or the Alice for two shillings for adults and one shilling for a child) from wharves at Breakfast Creek and Creek Street.

1890 flood scene at intersection Elizabeth Street and Creek Street, Brisbane. In the background across the water is the sign for ‘Queensport Aquarium’ which was the Aquarium’s wharf. A part of Kangaroo Point is visible in the distance, 1890. John Oxley Library, State Library of Queensland. Neg 66441

The Aquarium boosted the popularity of the area and the land near the Aquarium was subdivided and sold as The Queensport Aquarium Estate which reportedly had 684 allotments. The Aquarium was very badly damaged during the 1893 flood and the depression of the 1890s would not have helped business either. It certainly affected the financial position of Harry Hardwicke as he was eventually declared insolvent in 1901.[6]

I discovered in my research that there was an information plaque about the Aquarium in the relatively new Queensport Rocks Park which is underneath the southern side of the Gateway Bridge. So I drove there and started walking along the path which weaves around various industrial buildings. 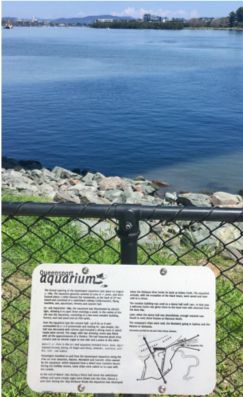 I found the information plaque on the Aquarium but continued wandering along the path noting other plaques until I noticed one with the heading Queensland Meatworks. I read it and suddenly a  name caught my eye, The Queensland Freezing and Food Export Company. I knew my paternal great grandfather had been involved in a scheme to export frozen meat but I had never known from where this company operated and what its name had been. I later discovered this was the company.

The Queensland Freezing and Food Export Company had been set up in August 1880 and my great grandfather, Joshua Bell, George Davenport and Edward Wienholt were the largest shareholders.  The primary object of the company was to be …dealers in and preservers and exporters of every description of food suitable for human consumption which may require to be frozen or others preserved prior to or whilst in course of transit…[7] By May 1881 the company was building premises at Queensport which included a canning factory, a freezing house and between these buildings was a Halam patent dry cold air machine. There was a slaughterhouse and stock yards and even employees’ cottages including one for the overseer.

George Davenport died in January 1881[8] and my great grandfather died on 20 December 1881 which would have been a big blow to the Company.  But in April 1881 the The Brisbane Courier was writing that …there is now a fair prospect of the frozen meat trade becoming an established industry in the neighbourhood of Brisbane[9]  but it was not until October 1884 that the Company finally exported 100 tons of frozen beef and 50 casks of tallow by the steamer Dorunda.[10] 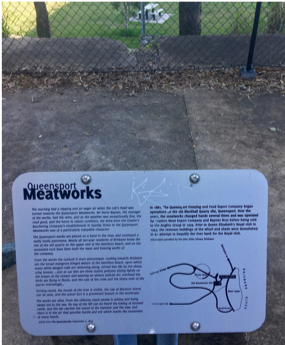 My great grandparents may have known of each other but Joshua would have been dead well before Harry Hardwicke returned to Queensland.  So my misty musings about 130 years later that they could have met down on the edge of the Brisbane River at Queensport where I had walked could certainly never have happened!

Thanks to Kay McCarthy for all her family information.